Chinese History in Saskatchewan: The Howe Family and the Star Café 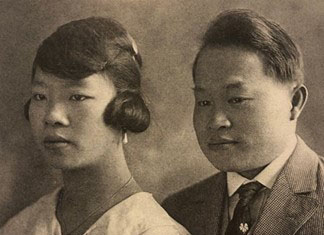 This is our fourth and final blog post in our summer series on Chinese history in Saskatchewan. Our final post highlights the story of the Wong Howe family and the Star Café of Marcelin, Saskatchewan.

Wong Get How, known to his customers as Charlie Howe, was born in 1886 in Canton, China. He appears to have begun using Howe as his surname when he arrived in Canada. In Chinese culture, surnames come first, followed by a person’s given name. In this case, Wong was his surname and How was his given name. It’s likely that a Canadian immigration official, unfamiliar with Chinese name order, mistakenly assumed How was the family name and anglicized it to Howe in the process.

When he was 12 years old, Charlie worked his way to Canada on a ship that sailed to Vancouver. Jennie Wong Howe was also born in China but was brought to Canada as a small child, carried off the ship in the arms of her father, Mr. Chow Dan. Charlie and Jennie met in Vancouver and were married in 1918.

While in Vancouver, Charlie earned a living as a barber while also painting portraits in his spare time.  In the early 1920s, the couple moved to Oyen, Alberta to join a partnership running the Stampede Café. Their son, David Howe, was born there in 1921. In early 1923, they moved to Blaine Lake, Saskatchewan, where their daughter Pearl was born.

On December 24, 1923, Jennie, David and Pearl followed Charlie and his brother Mah, who had previously moved to Marcelin, Saskatchewan to set up a restaurant: The Star Café. According to David Howe, the next day was incredibly busy for the restaurant with people packing into the café after church services.

The Star Café was the sixth eating establishment operating in Marcelin at the time. Despite the competition the other five restaurants presented, it did well in its early years. It was a popular date spot among young couples who had no cars to get around in. Couples would walk together to the café where the high-backed booths allowed for some privacy from other patrons.

The Howe family adapted quickly to life in Canada, but they maintained connections to their Chinese roots. The evening meal was always Cantonese-style food, and Jennie kept some of her Chinese clothing through her life in Saskatchewan even though she generally wore Western-style clothing.

Pearl became a nurse in the late 1940s, married, and lived in multiple cities across Canada before settling in London, Ontario with her husband. David took over the café and expanded the business to include radio repair and, later, television repair. The first black and white television in Marcelin was brought in by David Howe, as was the first colour television.

David ran the café until 2002 when, after 79 years in business, he decided to retire and close the café. He was 81 years old at the time. After its closure, many of the Howe family items came into the WDM collection to help preserve this story.

Though it became the longest-operating business in Marcelin, the Star Café faced some hard times through the years. In the 1930s, business slowed down considerably due to the Great Depression and droughts that plagued Saskatchewan. The Howe family was struggling to make ends meet and were faced with mounting debt to suppliers. Charlie and Jennie were seriously considering selling the restaurant to pay their debts when 12-year-old David had an idea. He contacted John Diefenbaker, then a lawyer working in Prince Albert, who helped the family negotiate a debt-payment schedule that was accepted by the creditors, allowing the family to keep the restaurant.

David Wong Howe was a prominent member of the Marcelin community. He served three years as the town’s mayor, sold insurance to people in the community, repaired and sold electronics, and organized a Christian fellowship. He was also a popular Master of Ceremonies at town events, speaking at birthdays, weddings and anniversary parties. He met two Prime Ministers as well: Louis St. Laurent and John Diefenbaker, who had helped save the Star Café many years prior.

The Star Café and the Howe family have certainly left their mark on Marcelin. Though David, the last of the Howe family living in Saskatchewan, passed away in 2016 at 95 years old, his impact on Marcelin and the surrounding communities will not soon be forgotten. Through his life he was made a member of the Order of Saskatchewan, received the Lieutenant Governor’s Canada 125 medal, and, in 2015, was named Marcelin’s HomeTown Hero in a CTV-sponsored contest. His name was also sent to Mars on one of the two Mars rovers launched by NASA in 2003.