The S.S. City of Medicine Hat and the Northcote: Two Famous Saskatchewan Steamships 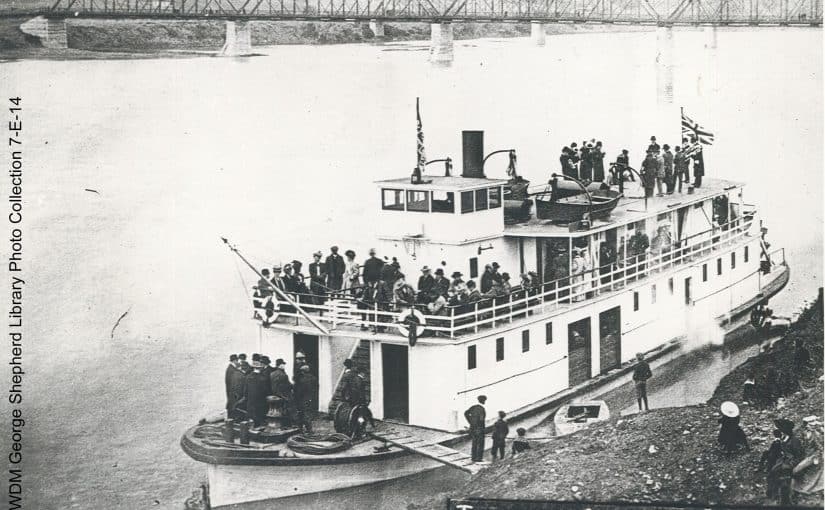 On June 7, 1908, the S.S. City of Medicine Hat, an elaborate steam ship designed and captained by Horatio Hamilton Ross, was traveling through Saskatoon on its way to Winnipeg from Medicine Hat. The South Saskatchewan River, still high from spring run-off, was difficult to navigate. The high waters would have made it difficult to travel under the bridge under the best of circumstances, but there was another complication: a telegraph wire was strung across the river, hidden from view by the high waters. When the ship traveled over it, this wire got caught in the ship’s rudder, making it impossible to steer. The ship crashed into the southernmost pier of the Traffic Bridge and tipped onto its side.

Luckily, many of the passengers on the ship had been let off to see the sights in Saskatoon as the ship had approached the city. Most of the people remaining on board the ship were crew. All people aboard the ship made it off safely, helped in part by a number of residents who had been standing atop the bridge to watch the ship as it passed through the city.

Engineers from the City of Saskatoon pulled the ship off the bridge, cut it into pieces, and left it at the bottom of the river. A few pieces of the ship, including its boiler and an anchor from one of the lifeboats, were recovered. This boiler is now in the WDM collection and is stored at the WDM Moose Jaw.

The S.S City of Medicine Hat remained largely forgotten by City of Saskatoon residents. A sandbar formed over its remains, burying it from view, and later it was covered by infill land as the park area around the south side of the traffic bridge was developed into Rotary Park.

The ship sprang back into memory in 2006 when an anchor was recovered during a training exercise for Saskatoon Fire and Protective Services. Analysis concluded that the anchor was from the S.S. City of Medicine Hat, and arrangements were made for a five day underwater archaeological excavation of the ship in 2008. A number of artifacts were recovered and a documentary film, “The Last Steamship: The Search for the S.S. City of Medicine Hat,” was produced about the excavations. In 2012, when parts of the Traffic Bridge were being demolished, more artifacts were recovered.

In the Watercraft Gallery of the WDM Moose Jaw, a partial replica of the City of Medicine Hat has been constructed for use as an exhibit space. It features the lifeboat anchor recovered from the ship as well as artifacts relating to other water vehicles from Saskatchewan’s history.

The Northcote is another famous ship from the history of the area now known as Saskatchewan. Used by the Canadian military to transport troops in the 1885 Resistance, the Northcote was severely damaged in the conflict.

The ship was on its way to deliver Canadian soldiers north of Batoche, where they would trek south to the battlefield. If successful, the reinforcements would have forced the Métis to face a battle on two fronts: the army that was already there to their south, and the reinforcements to their north.

Under the leadership of Gabriel Dumont, men fighting for Batoche and other nearby Métis communities were prepared and waiting for the ship on both the east and west sides of the river. Though the Northcote had been reinforced with extra wood to make it better able to withstand gunfire, the shots kept the crew and soldiers on edge.

When the Northcote was approaching Batoche at Gabriel’s Crossing, members of the Métis resistance lowered a ferry cable across the river. When the ship ran into the wire, its smokestacks were knocked over. This disabled the ship and made it impossible for the reinforcements aboard to come to the assistance of the Canadian forces. This was a major success for the Métis resistance.

The Northcote was eventually beached at Cumberland House in 1886 and left to rot. Pieces of the Northcote, including some wood and the stove from the ship, as well as a scale model of the ship are displayed in the WDM Moose Jaw, inside the replica S.S. City of Medicine Hat.