The Great Depression – Making Do 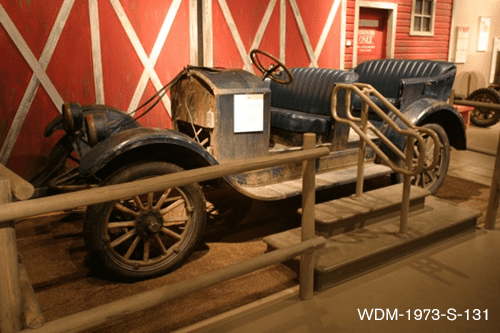 The Great Depression was a period of widespread hardship in Saskatchewan and across Canada in the 1930s. Across Canada, a third of workers were unable to find work and a fifth of Canadians relied on government assistance to survive. The Depression was brought to an end by the Second World War, which created a high demand for workers, soldiers, and goods.

The Great Depression coincided with what is known as the “Dirty Thirties.” This was an extended period of drought and crop failure through the 1930s and included dust storms and swarms of insects eating what little crops were left. Low wheat prices furthered the economic damage done, and two thirds of Saskatchewan’s population relied on government assistance to survive.

To survive the Depression, most people in Saskatchewan had to adjust their ways of life. People had to make do with what they had, as they were frequently unable to afford items they had previously relied on. The “Bennett Buggy” is a well-known example of this. Unable to afford gasoline for their cars, farmers would remove the engines and hitch their horses to their cars to create a buggy. These were named for Prime Minister R. B. Bennett, Prime Minister from 1930 to 1935, who most thought did not do enough to relieve the conditions of the Depression.

This log-cabin style quilt was made early in the Depression with small scraps from men’s clothing. Throughout the Depression, most people had to use everything available to them to make ends meet. Using the scraps from clothing to make a quilt shows how careful many were to not let anything go to waste in this period. The woman who made this quilt had moved to Saskatchewan from Nova Scotia in 1928, just before the start of the Depression.

During the Depression, food prices were so low that it often cost more to ship goods than sellers would make from the sale. Because of this, products like milk had to be used on the farms where they were produced. In order to preserve the milk, products like butter churns and cheese presses were used to turn milk into longer-lasting products like cheese or butter.

This cheese press was built in 1930 using scraps of materials from his farmyard. It was in use until 1935. The farmer who built it could not sell his milk due to the low prices for dairy and the high shipping costs. 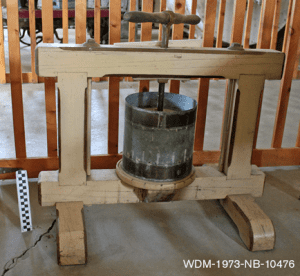 With failed crops across the province and high unemployment, many people in Saskatchewan had nothing to eat. Generously, the people of Newfoundland, which didn’t join Confederation until 1949, sent salted codfish to the Canadian prairies as relief for the people. Many other Canadian provinces also sent food and clothing to the prairies to help in the Depression years.

This salted codfish was found in 1977 in the attic of a house that had recently been relocated from a farm to Beechy. It dates to the Depression and is likely part of a donation of food that had come from Newfoundland to Saskatchewan.

The Depression impacted virtually all people in Saskatchewan, but some were more heavily impacted than others. Métis people, who had been forced into poverty after the 1885 North-West Resistance, were heavily hit by economic hardship. Many were unable to afford their own land and worked as farm labourers for food. When the Depression hit, these farm labourers were the first to be let go when money became scarce. Many Métis families had been living in road allowances, sections of land set aside for future road development, for decades. In the 1930s many road allowance Métis were forcibly relocated from their homes to allow for the development of communal farms.

First Nations farmers had already been struggling to manage, hampered by the restrictions of the pass and permit systems implemented by the federal government, which required all First Nations people living on reserve to have the permission of an Indian Agent to leave their reserve for any purpose. They were also required to have a permit to buy or sell produce and even to slaughter their own livestock. In the bad conditions of the Depression, the requirement for passes and permits left many First Nations people with few options for survival. While the pass system was gradually phased out in this decade, there is growing evidence it was still being used into the mid-1950s in Saskatchewan.

Women began to work outside of the home more frequently during the Depression. Families needed additional income and so having two wage earners would have helped make ends meet. In addition to this, women were paid significantly lower wages than men, which made them attractive hires for businesses that were struggling to turn a profit.

The social safety net of welfare in Canada rose out of this period. The Depression required people to use everything at their disposal to survive, and many made it through thanks to the kindness of strangers. People were quick to realize the importance of having something or someone to turn to when all else failed, and the danger of leaving people in dire conditions with no help was clear. Trade unions and workers pressured the government of Prime Minister Bennett to implement long-term social safety nets such as housing assistance. The government was hesitant to comply at first, but as the Depression dragged on the necessity of these services became clearer. In 1935, Bennett introduced his “New Deal,” which, among other reforms, introduced a higher minimum wage, limits to hours worked by employees, unemployment insurance and pension plans.

Though it was almost a century ago, memories of this period still feature prominently in the minds of the people of Saskatchewan. The social fabric of Saskatchewan and Canada changed dramatically in this decade. The struggles of the Depression era stayed in people’s minds, often for their whole lives, passing these stories of hardships through their families. These stories of human ingenuity and kindness from this period are only a handful, but they represent the some of the ways people fought to survive.