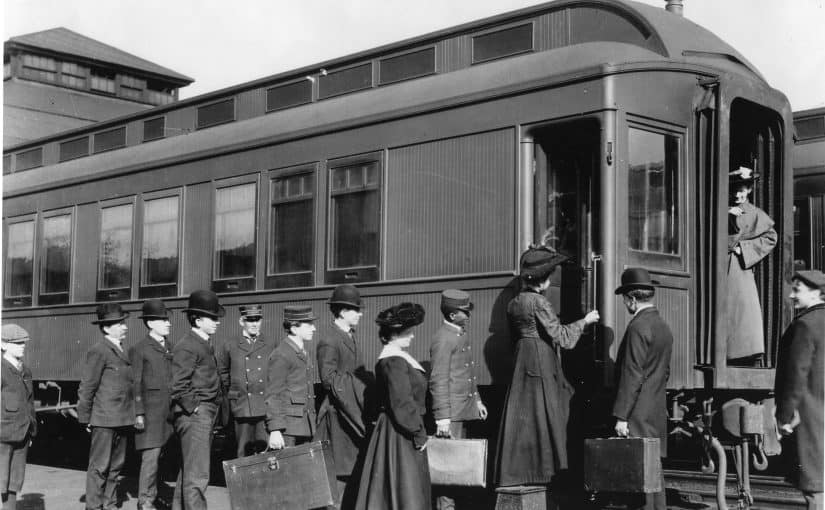 This is the first part in a two-part blog series on Black railway porters.

Though much has been written on how essential the railway was in paving the way for western settlement in Canada, there is much less understood about the people who worked on the trains. This is especially true when it comes to sleeping car porters, who, from the 1880s to the 1960s were almost exclusively Black men.

Porters worked in sleeper cars on railways and were responsible for every aspect of customer service in their train car aside from taking tickets, which fell to the conductor. Cleaning, making beds, stoking fires, shining shoes, giving local advice and information to passengers, waking passengers up when they reached their stops and many other aspects of customer service fell to the porters.

The service provided on rail lines in Canada was expected to be impeccable. Railway companies were all known for providing excellent service to passengers. But who was providing this service is a too-often overlooked aspect of Canadian railway history.

Finding cheap workers was important to the operators of the main sleeper trains in Canada. Especially after White workers unionized, Black workers were attractive employees. Because of the refusal of White unions to allow them membership they could be made to work longer hours for lower wages. When Black workers were hard to find in Canada, railway companies looked south to the United States and the Caribbean as sources of labour.

Recruiters relied on discriminatory stereotypes to find workers they thought would cause the least trouble. Black farmers from the southern United States were targeted because recruiters theorized that, having grown up in a segregated South, they would not object to racial segregation on the railways. Similarly, plantation workers in the Caribbean were targeted because they were thought to be used to serving White people.

Workers from America and the Caribbean were pushed from their homes by low wages, extreme racism and difficult working conditions. They were pulled to Canada with the promise of higher wages, reliable work and less discrimination. However, upon arriving in Canada many of these Black workers discovered that Canada was often just as segregated and discriminatory as the United States. A significant number of these American workers chose to return to the United States where they could be nearer to their families and in warmer climates rather than stay and face similar discrimination alone in Canada.

Because of the need to attract workers from the Caribbean, railway companies and the Canadian government worked closely with many Caribbean nations’ governments to smooth the pathway for immigration to Canada. Though the Alien Labour Act (1897) made it illegal to entice foreign workers to Canada, railway companies either circumvented or outright ignored this legislation, choosing to pay the fines rather than obey the law.

At the same time, these companies began planning a way around the Alien Labour Act: bringing a Caribbean nation into the fold as a province of Canada. Jamaica, Barbados, Bermuda and the Bahamas were all suggested as possible provinces that would allow a freer flow of Black labour into Canada. However, the idea of creating a Caribbean province was not appealing to the general public. The number of new Black citizens this would create, particularly the fact that they would be able to vote, unnerved White Canadians. Though those in favour of creating a Caribbean province tried to assure White Canadians that they would find ways to prevent new Black citizens from voting, these racist fears were hard to dismiss. In addition to concern over losing political power to Black voters, completely unfounded moral panic arose around the thought of Black men ‘corrupting’ White women. Those who were against the creation of a Canadian province in the Caribbean eventually won out and the dream of a Caribbean province of Canada was never realized.

The First World War further increased the need to import labour. As many of the White men who had worked on the railways were shipping off to Europe, labour shortages became a problem. Black men faced many barriers to enlisting in the military at this time, which made them easier to keep on staff. Railway companies became bolder in their disregard for the Alien Labour Act, openly and vocally recruiting foreign Black workers. Between 1916 and 1919, the Canadian Pacific Railway alone brought in over 500 Black men to work as porters.

The First World War also created a dramatic worsening of working conditions for all railway workers. If unionized White workers complained, they would be fired and replaced with ununionized Black workers. This increased already high racial tensions on the railway lines. In response to this, the railway unions that had banned Black men from joining blamed their worsening working conditions and increasing unemployment on foreign workers rather than on the railway companies. This inspired Black workers to create their own labour union.

In 1917, Black railway porters in Canada created the first Black railway union in North America: The Order of Sleeping Car Porters (OSCP). Under the leadership of John A. Robinson, a porter from St. Kitts, this union fought against the segregation of railway workers and drew attention to the racist discrimination they faced. Having been barred from joining the pre-existing union for railway employees and forced to take lower wages and worse working conditions than their White counterparts, Black railway porters felt strongly that unionization was the only way to protect themselves from further exploitation.

The railway companies had also intentionally fuelled racial tensions between Black and White workers. By pitting the two groups against each other, they managed to make each group blame the other for their poor working conditions, keeping the focus off railway management. Black workers resented White workers for banning them from their union and forcing them into lower-paying and more difficult jobs, while White workers saw Black workers as union-busting scabs, hired only to take the place of more highly paid unionized workers.

By the end of 1919, all railway car porters in Canada were unionized under the OCSP. The OCSP sought to unify White and Black workers through recognizing the shared struggles of the working class, but the White workers were generally unwilling to work in solidarity.

Black railway workers and their union became mouthpieces for the broader African-Canadian community. They advocated not just for better working conditions for railway workers but for all people of African descent in Canada.

Sleeping car porters worked across Canada and lived in cities all along the railways, including in Saskatchewan. One of the most famous Saskatchewan connections to railway porters is Robert Ellis “Stonewall” Jackson, the first Black person to play for the Saskatchewan Roughriders (then called the Regina Roughriders). He played with the team for one year, in 1930, while also working as a porter.

In 1930, the Roughriders were not a professional team, and most team members had day jobs. When traveling for games the players had to take time off work. Jackson, however, appears to have worked on at least some of the trips for games. The team traveled by rail, so Jackson seems to have been able to work on the trips. On the way to the 1930 Grey Cup championship in Toronto, the team traveled on the Canadian National Railway (CNR) to attend the game. Jackson worked on the train that was carrying his team out east rather than take time off.

Jackson appears in the 1930 Roughriders team photo, but he is wearing a collared shirt, tie and vest rather than the team uniform. The reason is unclear but it’s possible he arrived late due to his work duties and his clothes are part of his porter uniform.

Black railway porters were vital to the smooth operation of passenger trains in Canada. Though the work was hard and sometimes dangerous, porters took pride in their work. Recognizing the unfair situations they were forced into by their White coworkers and railway managers, they fought hard for fair treatment. The creation of the first Black railway union in North America helped them accomplish goals of higher wages and shorter hours. Many porters immigrated to Canada in search of better pay or a more tolerant society. When they didn’t find these, many returned to their homes in the American south or the Caribbean. Those who stayed and made Canada their home, raised their families here, and became important members of their communities.

Black railway workers advocated for their communities and fought to raise the standard of living for Black people across Canada. Though they did not find solidarity with their White coworkers, they fought hard to win their rights.

Railway porters played a significant role in Canadian history, and it is important that this history is not forgotten.

Chaput, John. They Came, They Played… But Not For Long: African-American Football Players on the Saskatchewan Roughriders, 1910-63.