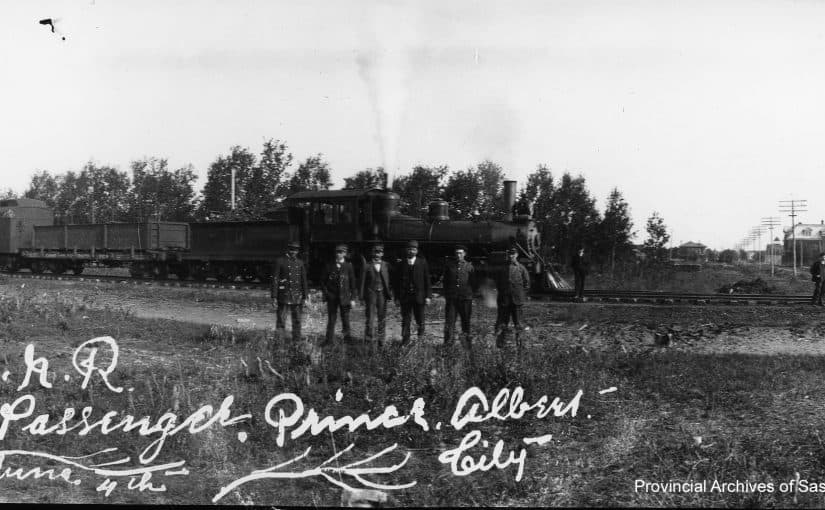 With special thanks to Arnold LaFayette, Carol Lafayette Boyd and the Saskatchewan African Canadian Heritage Museum, for their assistance in the research and writing of this post.

This is the second part in a two-part blog series on Black railway porters. You can find the first part here.

Arnold LaFayette was born and raised on a farm near Rosetown. His father’s family came to Regina from Iowa in 1906 and his mother’s family came from Oklahoma in 1910. His father’s family originally settled near Regina. However, they relocated to the Oskaloosa district near Rosetown where his grandfather set up a homestead by 1911. Arnold believes that they came to Canada from the United States to escape the legacy of slavery. At the time, farming was the only occupation they could easily pursue.

The LaFayette family was large and the Oskaloosa (named after the town in Iowa where his grandfather had lived) school taught all students. The only Black students were from the LaFayette family. The LaFayette students particularly excelled at track and field. At track meets, Arnold recalls often being called racial slurs by White competitors who were frustrated by losing to Black athletes.

Students would attend the Oskaloosa school up to grade 8, at which point they would go to high school in Rosetown or take correspondence.

In 1954, when Arnold was old enough to start working, he looked to the railway for his first job. His mother knew a woman in Saskatoon who ran a boarding house for railway porters and redcaps. His family drove him three hours to Saskatoon to meet with this woman, who assured him that she could get him a job as a redcap right away due to her connections with all the railway porters. The boarding house was on Avenue C North. It was a two-storey house run by a single Black woman.

Coming from a farm with no work experience, there were few jobs that Arnold could get, especially in Saskatchewan. Racial discrimination made it even harder to find good work. Arnold recalls that it was easier for a Black person to find work outside the railway industry in Edmonton or Calgary than in Saskatchewan. In the 1950s, and even into the 1960s, work as a porter was one of the best jobs a Black man could get.

While porters rode the trains and travelled across the country, redcaps stayed in one city and helped passengers load and unload their luggage for the train and help passengers to their cars or taxis. Arnold recalls that the uniforms for porters and redcaps were almost identical, the only difference was that porters wore grey caps while redcaps wore red ones, hence the name.

The job duties of porters were more extensive than those of a redcap. Each sleeper car had one porter who was responsible for making the 10-12 beds on their car, getting all the passengers settled, and putting the beds away in the morning.

Arnold worked for two years as a redcap in Saskatoon. He made good money for the time in wages and made additional money in tips from passengers. The salary for a redcap was about $200 per week, but redcaps could double their wages through tips. Rent in the rooming house was $200/month. CNR (Canadian National Railway) subsidized the housing costs by paying the manager directly to keep prices affordable for CNR employees.

There were two shifts a day for redcaps, one in the morning and one in the late afternoon. The shifts weren’t particularly long, especially compared to the hours worked by porters. As a porter, you were expected to work all the time when you were on the train. For example, a train from Saskatoon to Vancouver took 48 hours. Porters would sleep four hours a night and otherwise were expected to be ready to work at any moment.

After two years working as a redcap, Arnold wanted to travel and see the rest of the country, so he took a job as a porter. Porters were not based out of Saskatoon, only Vancouver, Edmonton, Calgary, Winnipeg, Montreal, Toronto and a couple other cities. The boarding houses in Saskatoon that housed porters were mostly for those who were passing through town. In the towns that porters were based out of, social clubs for porters were common. They’d have dances, games and drinking. As of 2018 there were still a handful of these clubs in existence in Canada.

As a porter, Arnold primarily worked the routes out of Calgary going either west to Vancouver or east to Winnipeg.

By the time Arnold worked for the railways, all positions were unionized. However, for the first few years of Arnold’s career as a porter, Black people were limited to working as porters or redcaps. Arnold explained that there was no written policy at the time preventing them from applying for other jobs with the railway, but they would never be offered other jobs no matter how qualified they were. One of the most significant moments in terms of career advancement that Arnold recalled was in the late 1950s, Prime Minister Diefenbaker would regularly ride the train from Prince Albert to Ottawa via Saskatoon. Diefenbaker would often chat with the workers on the train. At one point he observed that all the porters and redcaps were Black, but that Black men were never in any other position. He asked a porter why this was, and the porter explained that they would apply for all sorts of other jobs but would never be offered these positions. Diefenbaker told the porters he would look into things and change them so that they could work wherever they liked.

The porters didn’t think much of this promise, mostly assuming it was an empty political promise, but Diefenbaker intervened and soon things changed. Black men were suddenly able to apply for any jobs they were qualified for and receive job offers. Arnold was able to go from working as a porter to working out of Winnipeg in a dining car, where the pay was better. He later worked as a dining car steward and then a sleeping car conductor. He credits Diefenbaker with making the changes necessary to allow Black men to advance in their careers.

Finding information on this topic from Diefenbaker’s perspective has proven difficult. The Diefenbaker Archives, held by the University of Saskatchewan Archives and Special Collections, has boxes upon boxes of correspondence to and from Prime Minister Diefenbaker relating to railway labour issues, and searching for anything about Black porters is like searching for a needle in a haystack. More research is needed to unearth these details.

While he was living in Saskatoon, Arnold would drive the woman who ran the boarding house to and from horse races. While accompanying her, he grew interested in horse racing as well.

In the early 1960s, Arnold relocated from Calgary to Montreal. He recalls that shortly after moving there he decided to go check out the horse races and ran into the woman who had run the boarding house in Saskatoon. She had moved to Montreal to run a rooming house there, just like in Saskatoon. The two caught up and kept in touch throughout his time in Montreal.

Arnold’s first marriage was when he was working in Winnipeg. He believes he got married too young and so it didn’t work out. When he divorced, he moved to Montreal for a fresh start. There he met his second wife. The mother of the employee who set the work schedules lived in an apartment with a woman from Rosetown, and, knowing that Arnold was also from Rosetown, he introduced the two of them. They married and stayed in Montreal for a few years before moving back to Saskatchewan. She worked for a bank and was easily able to transfer to another branch, while he cashed out his railway pension for the move. They moved to Regina, where they still live today. They have been married for almost 45 years.

There are still Lafayettes living near Rosetown. They have family reunions every few years. The most recent event had over 200 Lafayettes in attendance. There hasn’t been a reunion for a few years though. They take a lot of work to put on, and the COVID-19 pandemic has also made it difficult to plan events for large populations of people. Neighbours and community members are also welcomed at the reunions when they happen.

Arnold looks back fondly on his years working for the railway. He was able to see much of the country and meet many interesting people. He has lost touch with his friends from his railway days, which he regrets. He’s lost the contact information for his friends from those years.

In 2017, his wife took the train out east and, upon learning she was a Lafayette and married to Arnold, many of the employees told her to encourage him to reach out to them to catch up. Without their numbers or addresses though, it’s impossible.

Today, railway porters are people from all backgrounds, the job is no longer limited to Black men. However, Black people still work in many positions for the railway, especially for CNR, in every position from porters to office managers.

This post is based off an oral history interview done in September 2021 with former porter and redcap, Arnold Lafayette.

Chaput, John. They Came, They Played… But Not For Long: African-American Football Players on the Saskatchewan Roughriders, 1910-63.