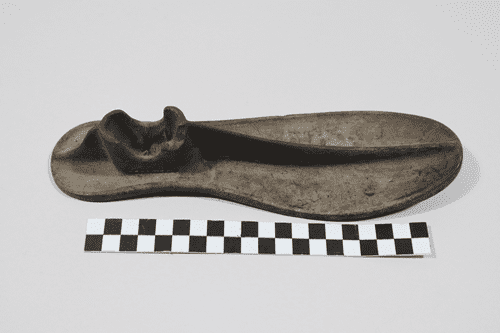 Shoe lasts are forms shaped like human feet. The word “last” comes from the Old English “laest” which appears to mean ‘footprint’ or ‘boot.’ They’re commonly used in shoemaking and shoe repair to ensure the shoe is shaped correctly.

This shoe last was used by Jakob Marjan, a cobbler who immigrated to Canada from what was then Yugoslavia in 1926 at the encouragement of his parents. In 1929, he settled in North Battleford and began work repairing shoes. His first shop was located in the Mills Hotel (now the Beaver Hotel) in North Battleford.

In 1931, he married Lottie Martin, a Polish immigrant to Saskatchewan, and together they had a narrow brick building built in which to house Jakob’s business.

Jakob worked out of the same brick building until 1979 when he retired. During his career he had contracts with the RCMP and the Royal Canadian Air Force to repair uniform boots for those stationed in and around North Battleford. His Air Force contract during the Second World War required him to repair 100-150 pairs of boots a week.

The building that housed Jakob’s business was slated for demolition in 1991 to make way for a new mall but was saved and instead donated to the WDM. It now sits on the grounds of the WDM North Battleford and is currently being developed for an exhibit on Jakob Marjan and shoemaking in Saskatchewan.

This shoe last and other artifacts like it will help tell Jakob’s story. Keep an eye out for more updates on the development of this exhibit in North Battleford!

Click here to learn more about moving the brick building.