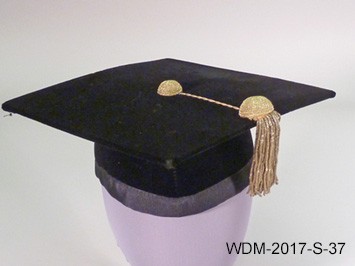 This cap and chancellor’s robes belonged to the Honourable Sylvia Fedoruk from her time as chancellor of the University of Saskatchewan, 1986 – 89. She was the first woman to hold the position.

Sylvia Fedoruk was born in Canora in 1927. Until her death in 2012, she was a dedicated athlete and medical pyhyicist. She was an accomplished athlete, winning Saskatchewan a gold medal in the first ever Diamond ‘D’ Championships for curling. She also played baseball and competed in track and field.

Sylvia was an accomplished student and academic, receiving a bachelor’s degree in Physics from the University of Saskatchewan in 1949 and a master’s in physics in 1951. In 1949, she was awarded the Governor General’s Gold Medal for academic achievement.

She was at the forefront of nuclear medical research in Canada and her achievements were highly recognized. In 1987. she was made an Officer of the Order of Canada, and she served as Lieutenant Governor of Saskatchewan from 1988 to 1994. She was inducted into the Canadian Medical Hall of Fame in 2009. In 2012, the Canadian Centre for Nuclear Innovation was renamed the Sylvia Fedoruk Canadian Centre for Nuclear Innovation.