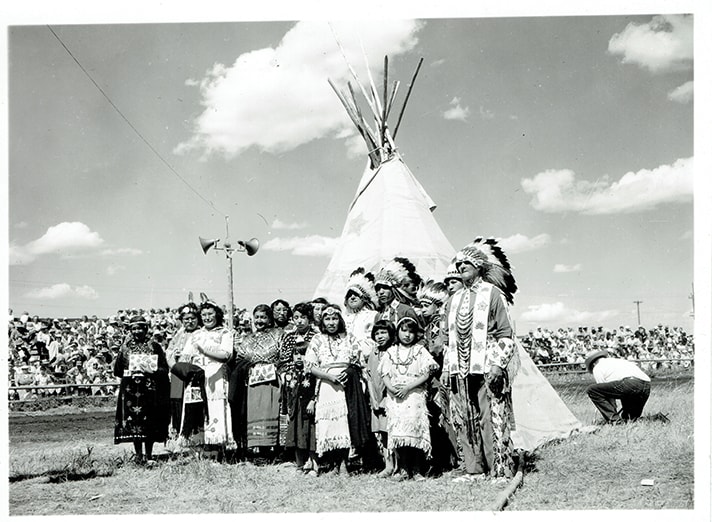 Together in the spirit of Reconciliation and partnership, Whitecap Dakota First Nation and the Western Development Museum (WDM) invite you to learn each of our perspectives on our shared past in our co-curated exhibit Wapaha Sk̄a Oyate: Living Our Culture, Sharing Our Community at Pion-Era, 1955 – 69 now on permanent display at the WDM Saskatoon.

Whitecap Dakota First Nation is a Dakota community 25 kilometers south of Saskatoon. Every summer from 1955 to 1969, many of our members participated in Pion-Era – a heritage exhibition first organized by the WDM for the Province’s Golden Jubilee. We accepted the Museum’s invitation to participate in Pion-Era on our own terms, determining which elements of our culture to showcase, like setting up and living in a tipi camp and performing cultural dances, as well as demonstrating our skills as horse people and expertise as livestock operators, despite having to negotiate economic barriers like the permit system that prevented our full access to the Canadian economy around us.

Our longtime presence in Saskatoon, with Chief Wapaha Ska (Whitecap) being a co-founder of the City with John Lake, framed our participation at Pion-Era, as well as other events like the Saskatoon Exhibition parades and competitions from the 1910s, to the opening of the Bessborough Hotel in 1935, the Royal Visit in 1939 and the opening of the Midtown Plaza in 1970. Our community’s presence at these events went beyond performing in costume for settlers at momentous occasions – we maintained autonomy over what we chose to share in public and used these occasions to link our past with our present.

Over these years, our relationship with the Museum grew from an economic one of selling hay, to a cultural one of being key participants in Pion-Era. Our Elders and Knowledge Keepers remember Pion-Era as an important part of our community’s summer, where families gathered to live aspects of our culture together alongside our non-Indigenous neighbours in Saskatoon. Today, we honour our relatives’ contributions to Pion-Era through this important exhibit, while acknowledging the barriers they faced in doing so.

For the WDM, memories of Indigenous participation at Pion-Era had faded over time. Our project, and specifically the oral histories the Whitecap Elders have generously shared, has helped us better understand how complex the early decades of Pion-Era were. They have taught us that their participation in Pion-Era, while remembered fondly and with pride, was not without barriers. Relatives of some of the participants kept letters, for example, that the WDM wrote to the Department of Indian Affairs in the late 1950s, asking for permission from the Indian Agent for the Whitecap community to leave their reserve and stay on the Pion-Era grounds in Saskatoon for the week. This is a stark reminder that Indigenous peoples did not enjoy the same mobility rights as other Saskatoonians attending Pion-Era.

Whitecap’s agricultural activities at Pion-Era complicate how we historicize Indigenous participation at heritage shows, rodeos and stampedes in western Canada. The community desired finding common ground with their settler friends and allies in Saskatoon, and connecting as rural people, as much as performing more visibly Indigenous cultural activities. The Elders have also reminded us on several occasions that going to Pion-Era was fun! It was a place where momentous community moments happened, like the birth of “Pion-Era Princess” Bernice Royal on July 4, 1959, an event celebrated for many years after.

In 2018, WDM staff found a set of photographs of unnamed Indigenous people at Pion-Era in the WDM’s George Shepherd Library. References to the “Moose Woods Reserve” suggested the people in them were likely from Whitecap Dakota First Nation. When we reached out to the community, we discovered the history of our long-ago relationship, and our shared desire to renew our connection began.

With the consent of Whitecap Elders and Leadership, naming the individuals in the photographs was the first step in our journey. Almost all the individuals in over 50 archival photographs have been identified, restoring their rightful place in the archive. The photo-naming project opened the door for Whitecap Elders to share other Pion-Era and community histories and develop an exhibit together on these incredible stories. These are histories that continue to reflect Whitecap Dakota First Nation’s values, achievements, innovation and nationhood.

Centering Indigenous Histories in the Museum

Today, we are restoring our relationship to once again showcase Dakota history and culture at the WDM. Our project has led to meaningful exchange between participants and puts decolonization to work in the Museum. Our shared authority approach restores Whitecap agency by centering their perspectives in the history of Pion-Era.

While we confront the historical inequities between the Museum and Whitecap Dakota First Nation, the memories of Pion-Era from the Whitecap perspective remind us that it was a place where Dakota people performed cultural exchanges on their own terms. Sharing this history through the WDM has been an important way to honour and remember the participants, rekindle old ties and more deeply understand Whitecap’s place in Saskatoon’s cultural, social and economic history. We would like to thank the Elders, Knowledge Keepers and Leadership from Whitecap for sharing this history with us.