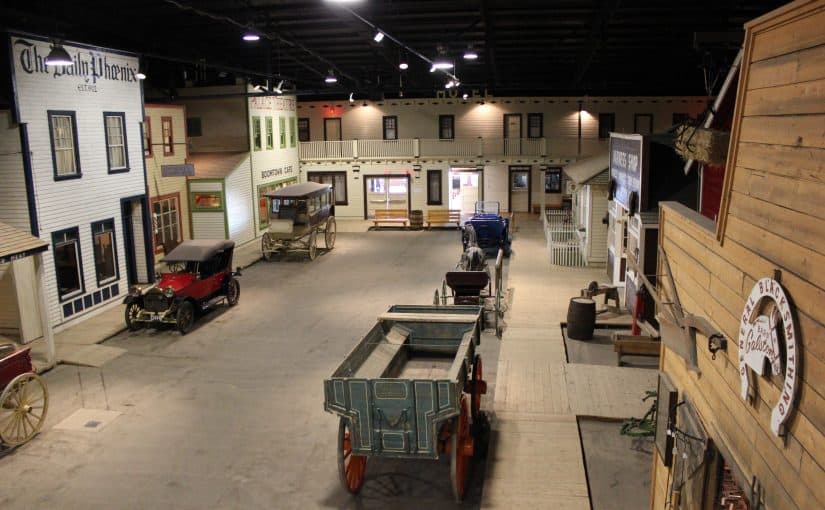 This summer marked 50 years since the Western Development Museum Saskatoon moved to its current location and opened “Boomtown Street” – providing years of memories and a sense of wonder for first time visitors and return guests alike. Even royal guests have strolled down Boomtown Street – Princess Margaret visited in 1980. Both the construction of Boomtown and Princess Margaret’s royal visit have been highlighted in blog posts earlier this year.

To learn more about our institutional history, we interviewed Rick Dixon, the former WDM Exhibits Coordinator who helped construct Boomtown and worked at the Museum for over 30 years.

When it was officially opened in 1972 by Saskatchewan Premier Allan Blakeney, Boomtown was said to be the longest indoor street in North America. Taking up approximately 1/3 of the 120,000 square foot building, Boomtown was the Museum’s main attraction. The WDM prided itself on the fact that the buildings on Boomtown were all fully constructed and could be entered by visitors, they weren’t just facades. In its first week at the new location, the Saskatoon Star Phoenix reported that from July 11-18, 1972, the WDM Saskatoon attracted 38,828 visitors.

Rick began work on Boomtown in January of 1972. When he started the work, there were only two buildings on the street. One was St. Peter’s Anglican Church, brought to the WDM from Young, Saskatchewan. The other building was the harness shop, which had been brought over from the previous Museum location at 11th Street West. All the other buildings had to be constructed in just a few short months. A crew of about 30-35 people worked on construction through the winter.

One problem the team ran into was that it was difficult to find period-appropriate windows, doors and doorframes for the buildings. They went to lumber yards across Saskatoon in search of old window and doorframes they could use for Boomtown. Later, in the later 1970s, someone who was about to tear down their 1911 house offered to let the team in to strip it of any fixtures that could be used. The WDM team went to the house and collected doors, doorframes and windows to use on later Boomtown constructions. The unused ones went into storage to be used in the future; some are still in storage at the WDM Corporate Office today.

The street on Boomtown was paved shortly before the Museum opened, but staff found it looked too modern with fresh pavement. To fix this, a layer of concrete powder was added to the top of the pavement to make it grey instead of black. This gave the street the appearance of a dirt road. However, the concrete powder created a lot of dust in the air. For the first couple of years after Boomtown opened, staff were frequently dusting the interiors of the buildings because of this.

Constructing the bank exhibit building presented several challenges. The vault in the bank is an artifact, not a replica. The vault was too big to fit through the doors of the bank, so instead they constructed the building but left the doorframes off until the vault could be placed inside. However, the weight of the vault hadn’t been taken into consideration when laying the floor of the bank. When the vault was placed, it broke through the floor. A concrete pad had to be poured to support the vault’s weight. Today, eagle-eyed visitors may be able to notice the edges of the pad beneath the vault if they look closely.

Rick is also a blacksmith and an instructor for the WDM’s blacksmithing courses. Turning the blacksmith shop on Boomtown into a working shop was his idea. It was a complicated project. He had to work with the city fire marshal to ensure it was safe to have an open fire inside a wood building. A number of modifications were made to ensure safety. Sprinklers were installed in the shop as well as in the buildings to either side. The wood floor was removed and the wall nearest the forge was covered in metal to protect from stray sparks. With these modifications, the fire marshal was satisfied that it was safe to use.

Over the past 50 years, Boomtown has gained a reputation as being a space for the community. The first wedding on Boomtown was held on October 6, 1972, inside St. Peter’s Church. Since then, Boomtown has become a popular and unique wedding venue in Saskatoon. About four weddings a year are held in St. Peter’s Church. Other events, like the annual Métis Cultural Days event, put on by the Central Urban Métis Federation Inc. (CUMFI), have found a home at the WDM as well. In 2007, the WDM hosted the opening reception for the Juno Awards, held that year in Saskatoon.

While it might seem much the same as it did 50 years ago, there have been several changes made to Boomtown over the years. A livery stable was added in 1987, the Bentley Store was renovated in 1990, and the Boomtown Photo Studio opened in 1992. The most recent building addition to Boomtown is the Edwards Funeral Home, which was added in 2015. In 2019, a long-term project began to review and update signage in all WDM museum galleries, including Boomtown Street. This year, it was announced that the WDM had received a grant from the PrairiesCan Canada Community Revitalization Fund (CCRF) and the Canadian Heritage Canada Cultural Spaces Fund (CCSF) to improve the physical accessibility of Boomtown.

Boomtown Street remains a fun and immersive way to explore Saskatchewan’s past. WDM staff looks forward to consistently reviewing and renewing it, revising older texts and adding new interpretation to continue working towards our Vision of A Saskatchewan Where Everyone Belongs and Histories